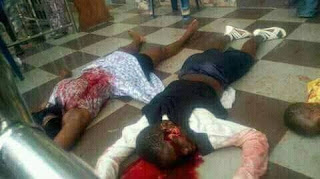 During the 6am mass this Sunday morning today being the 6th of August 2017, some gunmen (numbering between 2 and 6 according to different reports) invaded St Philip's Catholic Church Umuezekwe Ofufe Amakwa Ozubulu. They were said to be hot on the trail in pursuit of Chief Aloysius Ikegwuonu, a.k.a. Ebube Chukwu Uzo n'Ozubulu, also called Bishop who is the benefactor of the church. 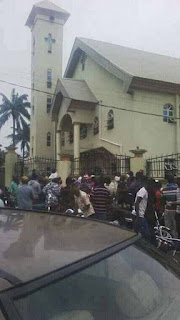 Armed heavily, and covering their faces in masks, they opened fire on the congregation, shooting sporadically and incessantly, killing scores of people, and injuring many others.

According to sources from Ozubulu the killers were assassins, and were asking after the Ebube Chukwu Uzo of Ozubulu, a rich mogul who was said to have just returned from South Africa. According to the story, they went to the Billionaires' house, but were told that he was not around, after he left last night. So they asked after his Dad who was attending the 6am mass, and traced him to the church. 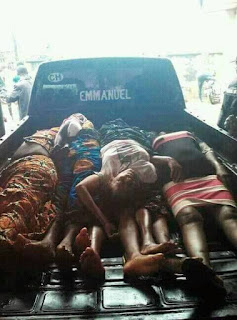 The story has it that they didn't know the man, but swore that they would keep shooting everyone, until they kill him, that there was no way they would kill fifty people without killing him.

As at now, the story holds that about 37 deaths have been reported, and that the said father of the targeted Bishop is among the deceased

Title : BLACK SUNDAY AT OZUBULU ANAMBRA STATE
Description : During the 6am mass this Sunday morning today being the 6th of August 2017, some gunmen (numbering between 2 and 6 according to different re...
Rating : 5
Related Posts: news